Is it my biological clock? Is it just the PMS? Is it the sweet nothings this dude so casually says? Is it seeing my friend's baby? ...or is it just what I've always wanted?

I think as a teenager most girls envision their 30 year old self married with kids...am I right? I don't know where I was living, who I was really with or what I was doing career wise, but I know I also had an Oscar hahaha...oh, teenage dreams!

I've been making lots of jokes referencing pregnancy, marriage, and kids. They're concocted of 1 part bitterness, 1 part confusion, 1 part repulsion, and 1 part "WHERE IS HE?!" (said in the Charlotte from SATC tone obvi) I made a big shift last year in convincing myself that I was worthy of not only dating, but also of love from a good man. I used to make all sorts of excuses of why I wasn't datable and now that I know (most days anyway), that I am deserving of all good things including love & family & a future with someone, it's making my mind go bonkers!!  My head is even overflowing with ways to make my apartment more of a home. What the hell is going on? I'm sorta freaking out. I'm pretty broke, still single even though seeing someone, don't have matching furniture and keep thinking I'll be that single modern woman that buys a baby all on her own...which I'm not against for the record, but not exactly what I'm dreaming of.  See! Without even realizing it, my final thought was baby. Dang.

So just like the rest of my whining posts, we finish open ended...
I have no idea what it is I want exactly, but I know what I don't want. That's a start!

PS: This Saturday at Cobra Club in BK, we're celebrating 1 year of Slapback! 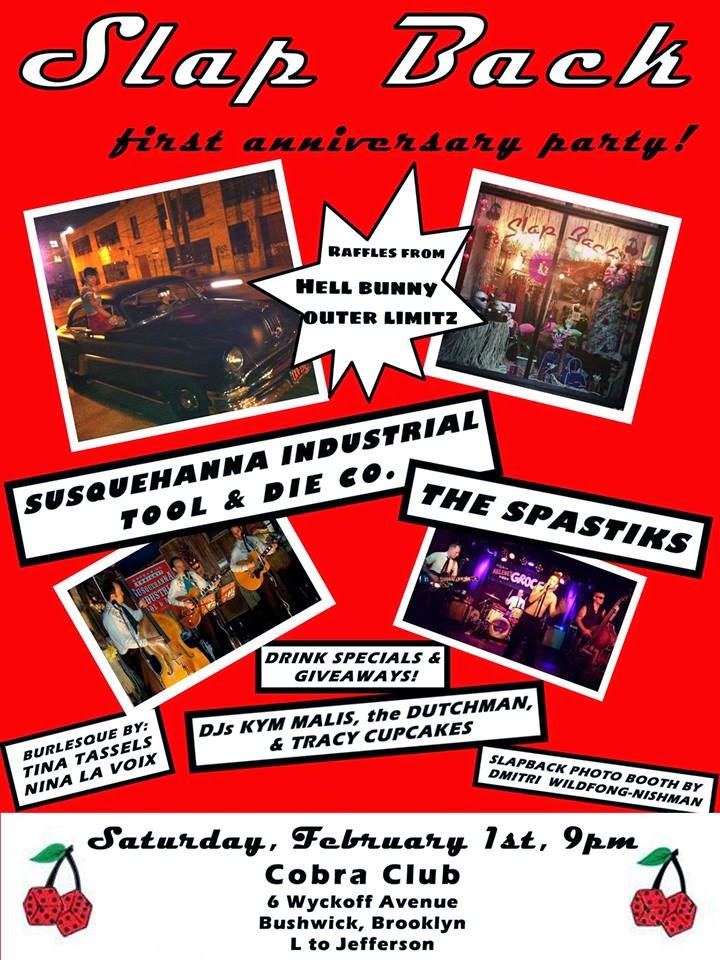 Posted by Tina Tassels at 2:45 PM No comments:

Snow Day? Not for me!

Well, the Bettie Page New York 1st anniversary party went off without a hitch....SO much fun!
Here's a shot from the end of the night by Jeffrey Grossman 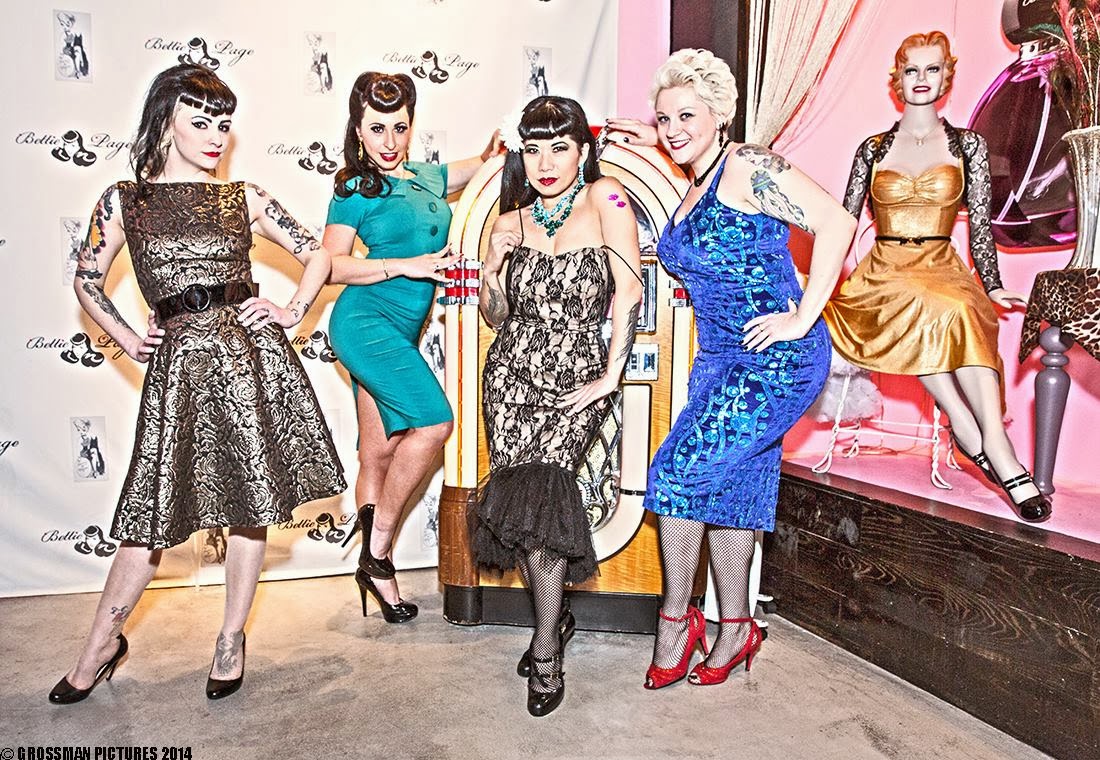 I was honored to perform on the same bill as both Calamity Chang AND Angie Pontani...what?!
We also had Chelsea Nenni & her band playing their Rock n Roll Cabaret and were amazing!

I don't have much going on this week aside from work, dinner, & heading to NJ for a quick hair-did trip.

My dude and I spent our usual Sunday night - Monday evening together. It's been convenient having the same nights/days available. Neither of us has an ideal schedule but we do what we have to do. And I know there aren't many people that would prefer either of our availability. I usually work weekends and he works late. If anything we've got it pretty made right now! He made a joke about taking me to Maury if I got pregnant and I assured him I wasn't sleeping with anyone else and he said "whatever, we haven't made this exclusive yet, but get it out of your system now before this gets serious." Freak! hahaha I laugh off everything he says. I'll believe anything when I see it. *sigh

Well it's snowing out & freezing. I've got to put some clothes on and get to work. Booooooo!
I really am brainstorming some youtube segments. HELP!
Should I just start doing vlogs in addition to writing? Should they be specific. I thought about doing an interview series. I don't freaking know!!!

Posted by Tina Tassels at 11:27 AM No comments:

WOW. What an amazing start to 2014!!
The Peacock Party was a hit at Duane Park -- another one on the way?? Stay tuned..
Emceed another successful show in Long Island at the 5th Annual Rockabilly Rave.
I was interviewed for a book in the works.
I received some beautiful "outtakes" from my calendar shoot with Pinups for Patriots by Mark Doyle Photography
I was in the right place at the right time to possibly be a part of a tv pilot -- lips are sealed
Oh, and THIS: 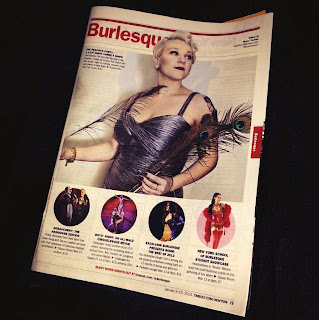 WHAT?!
I couldn't believe it. I subscribe to Time Out NY but I was working the day it would have arrived. I ran to Duane Reade before getting on the train to see if there was ANY mention of The Peacock Party and this is what I found. INSANE!! Incredibly flattered & feeling so humble about it all. Crazy. Turning that page was the wildest feeling. Thanks again to Dennis Cahlo for the shot!

And as I type this, I just got an invite to a private Postmodern Jukebox party. HOW EXCITING!! Have you seen/heard them yet? YouTube sensations singing the most amazing renditions of modern pop hits!

PS: I love this shot from Saturday's show in Long Island - Photo by MadStork 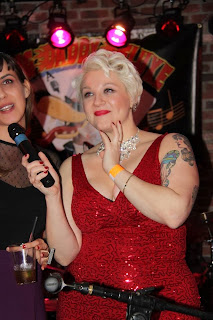 Posted by Tina Tassels at 10:13 AM No comments:

Holy cow, it's been weeks, I know...last week I worked and it was NYE before that was Christmas eve and I was in Jersey getting my hurr did and actually worked in my mom's salon because someone was sick. I was just shampooing and pulling colors through, don't worry!!

HAPPY NEW YEAR!!! Hope you're 2014 is going well despite the freeeeeezing weather on the East Coast - boooooooo!

I was actually going to blog last week about the phrase "you're gonna make a lucky man very happy."
That's what my dude said to me and I rolled my eyes (he didn't see that). I thought, of course some other man, not you, this is a waist of time, what are we doing here, etc...THIS WEEKEND he said the same thing and added "could be me, who knows..."
My friends keep asking the friends question: soooo, how's it going with so and so?
And my answer is the same: it's good.

I don't know if I'm missing something or if I've got super defenses up, but something isn't like I imagine it should be, I think. That spark that I believe in. He's so kind and incredibly generous with his words & affection, but...I don't know. And if he's being 100% honest - which I believe he is - he might be into this more than I am which I've never experienced before. As I write this though, I think about Monday morning and lying in bed next to him and I felt on top of the world with him. 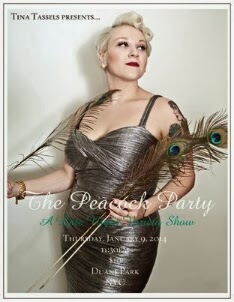 OH ALSO! Big step (I guess?) met one of his best friends since he was a kid! Friend said that my dude said "you've got to meet her". Crazytown!

I love coming here and just writing to you all. I also probably sound so confused, but I have no idea how I feel, perhaps I'm stressed/excited about The Peacock Party so my head is elsewhere but I AM enjoying myself and not rushing anything. The most important thing is that him and I are honest with one another about any good or bad we're feeling. That's the very least any 2 people owe each other.
Oh man, this is ridic. Being single is PEANUTS! hahaha

Thank you guys for tuning in after a fake/lazy hiatus. I hope you're well and perhaps I'll see you Thursday night ;)

Photo by: Dennis Cahlo
Posted by Tina Tassels at 9:19 AM No comments: