Posted by Tina Tassels at 9:42 AM No comments:

Sometimes by choice, other times I feel I have no choice.

I said it before: the dude I thought I'd eventually be with til I was old, is set to marry someone not named Tina Tassels. Somehow over the years (10+ to be clear) through all sorts of garbage and goodness we've remained friends. I am confident and honest to say he knows more about me than anybody else in my life. In recent weeks our relationship has shifted and I'm feeling much better about the realization that he is not mine nor will he ever be to the fullest capacity. If I believe in love, I must believe that everything is panning out the way it is supposed to.  Hardest physical & emotional stresses to work through but incredibly possible.

As for dating I haven't done it nearly as much as most people my age have. I don't have ex-boyfriend horror stories (thank God) but I also do not have lots of the experiences I fear will catch up to me later in life. On the regular, friends try to reassure me that they won't. I usually agree but as with most things, it is easier to give advice than to take it. During our young lives it is vital to be with ourselves, to realize who we are, who we want to be, and facing reality of what we might not have control over.  I may have this one up over most people I know, but I still feel at a loss.

I'm pretty sure I wanna be married one day. Sadly I think I just wanna love someone so much and have them be ok with it.  I don't feel comfortable saying I wanna be loved. That's an entirely different issue though. I say it over and over again: when I can afford a therapist I'll be asking all of you for recommendations HA!

I know I can be bitter too. I have far too many stories though that reinforce my frustration rather than help to heal it. I'm not looking to settle down necessarily, nor am I looking to sleep around but I will go with whatever flow feels good in the moment. Unfortunately most recent opportunities are with good people making bad decisions.  This sucks. I have to be honest with myself and admit how selfish I am to open the door when certain someones knock.
If the boats'a rockin, don't com a'knockin!?

All that sappy shit aside, I'm incredibly positive and open to possibility. Like any normal girl I get nervous when a super cute boy is chatting me up but I always assume he's gay and thinks I'm fabulous (stereotype alert!). I have bad gay-dar. I love everyone though I think that's why my radar doesn't even give a shit. My second assumption is that his girlfriend or wife is lingering. Yes, this is an issue in my life. My question after all seemingly good conversation is then "Why didn't he ask for my number either?!" grrrrr haha this my life! But then, because I'm bold and throw caution to the wind I hunt them down and make contact again. Works to my advantage even if for only 1 night.

I think I'm writing all of this because I'm still sorta high from the weekend. Had a really fantastic Saturday night into Sunday afternoon. I don't remember the last time that happened. But this person too is fleeting...what is a girl to do? *sigh


I realize this is a long post of nonsense and it is a bit of random vomit. I'm hanging in my new bedroom, in my new apartment, in my new neighborhood, with my new state of mind. Everything's gonna be alright!

Have a great week!


Omg. Where to start!?
I've been slackin big time on the interweb, my bad yo, but if you follow me on Twitter or hang with me on Facebook you're pretty much up-to-date! This place here, that you're reading, is only to indulge and vent and ramble on and on about myself...

So rewind a bit! Holy cow, I haven't been here since June 16th. Almost 2 months. Shit. This will probably be a short post because I'm overwhelmed by what to share ha! I'm so dumb.

I'm gonna do a long story short vomit of a recap, brace yourselves: 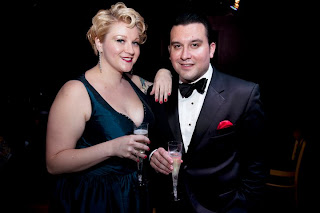 JUNE 24th, I had my second show at Full Cup in Staten Island: Fly Me to the Moon. Amazing. Nick Williams singing and hosting while a keyboardist & drummer accompanied. The live music changed the entire feel of the show. I fell in love. It was more of a classic night with some twists. My costume/performance of "Temptation" was all fucked up because I decided to wear my red gloves for some pop of color but what I failed to pay attention to is that I have tassels on those gloves and huge sequins on my dress so my intended-to-be-sexy hand running down the chest move was faltered. Friends are not good critics "no one could tell" totally lying because I didn't hide it too well, but I also know it felt worse than it looked. THEN, my stupid bra got hooked onto my fishnet body suit, yet another piece I've never worn with this costume but decided too. At the end I was laughing and (without control) yelled "IT WASN'T SUPPOSED TO BE THIS WAY" hahahah The cast was so wonderful. I was honored to host newbies & vets alike. I also, once again, had a number of Jersey friends representing. So cool. The show ran much smoother when it came to raffle prizes too.AND I ALMOST FORGOT I SANG!!! Finally. it was such a relief. "Tina Tassels and her Two Hand Band" is something I'm hoping to expand on. My two hand band obviously implies that I lack a real band but instead I snap! hahah But there was no greater joy than asking an entire audience to help me out. Bringing a room of strangers together like that is a truly powerful, and in my opinion, important moment in any show. I have faith everyone loved it as much as I did. 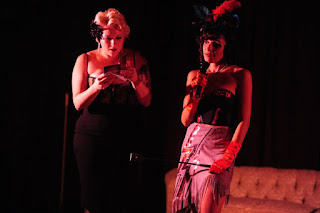 JULY was actually super busy and exciting. Some of that fizzled for now but hopefully will will boil up again...will explain. July 9th, I co-producer/hosted the first show at the grand opening night of Paris Cabaret & Burlesque in Red Hook with my girl Kiki Valentine. Remember her? Yeah, I know!! Was so stoked to be working along side her. It was a hugely successful night and had, mid-week, been asked to plan another one for the coming Saturday. We had another wonderful show except in my opinion it was too rushed to be able to spread the word enough. Aside from all this, we have some really beautiful photos from both nights by Eric Kun. Check Night #2 out here.  Unfortunately the owners are still trying to figure things out so to my knowledge there are no shows scheduled with Kiki and I. Majoy bummer but it's such  beautiful venue that I am honored have hosted/performed there. Also on the weekend of July 16th, I was part of a fundraiser show that a friend of a friend was organizing. She is a playwright and producer and asked me to be part of it and I couldn't resist! We had a great turn out and all proceeds of the door & silent auctions went to help fund Ampersand: A Romeo & Juliet Story go check it out at the Fringe Festival in NYC! For this, in trying my best to keep with the theme I went to the funeral of Leonardo DiCaprio as Romeo (naturally) and calmly removed my funeral garb to Des'ree's "Kissing You" from the soundtrack. I love that song. It's ridic. While rehearsing it I started to cry because I was so committed but to play with the audience I did more smirks than intended! I would love to have a copy of this performance if anyone out in the world has one!! The following Monday, I kittened at Macao Trading Co. for Calamity Chang's Drunken Dragon Nights. Sizzling hot show in a beautiful venue with classic acts. I loved it and hope to do it again. Although what I could do without was a grown man meowing at me all night. Listen buddy, take your button down embroidered shirt and thinning hair somewhere else. *puke* I also got to intro Calamity which is HUGE for me. I look up to her so much (not physically ha!) that it was cool to say a few words and get the crowd ready for her. WERK! THEN, after a much needed break from life with my old friends in Atlantic City, Sunday the 24th I had my Kitty Nights Debut!!! What an honor to work with Fem Appeal. Since the second I met her I fell in love much to what everyone said I'd do! Kitty Nights usually has an audience of entertainers which makes it exciting to sorta kick back with your peers and enjoy each other without the outside world interfering. Selfish? No doubt. *wink*

So after those 2 months I MOVED!!! I'm so excited to call Bay Ridge my new neighborhood. My apt is amazing and huge and cheaper. (Found on craigslist, 1 roommate, Jersey girl, woot woot!)  I've finally created a nice area for costumes and craft materials. and I have enough floor space to rehearse pretty much any act I can dream up, my room is THAT big. I feel like a born again virgin. The change has brought nothing but good vibes in every part of my life. I am feeling much freer than I have in the past few months. Change of location, roommates, streets, air is exactly what my mental, physical, and emotional health needed. Exhale. 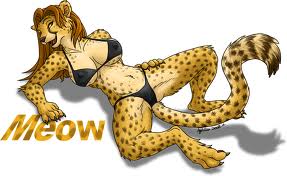 I have a couple of exciting things coming up this month, so far I know I will be kittening yet again for Dangerous Curves Ahead. I LOVE this group of super gorgeous, hilarious, sweet, talented women. I am honored they're having me on board again! And that is THIS Saturday, August 10 at Superfine in Dumbo, Brooklyn - come hang! By the way, isn't that the weirdest picture ever? HA!

Friday, the 26th I will be back at Drive Thru Burlesque! Again, I love Lefty & Sizzle. They are incredibly kind and great cheerleaders. I don't know what act to do. I really need to work on my jellyfish BUT I also wanna revisit "Sometimes I Get a Good Feeling". I've been having good ideas how to make it way better. We'll see how it goes once I start rehearsing it though.

Wow. I think I'm done.
A couple scary things have happened in my family in the past 5 days. 2 car accidents, 1 is really bad and I'm currently waiting for updates. Superstition says these things happen in 3s...so I sit here patiently.

Welcome back -if you've been here before- and thanks again for reading. I promise I'll try to update more. I realize that I should write when I feel like writing doesn't matter what is or isn't going on. It's therapeutic. Just so everyone knows I've been steady working at Sephora. I'm slowly transitioning into makeup artistry which is really exciting...it doesn't really pay the bills but the babysitting does. Once I'm back on my feet I will feel much more confident looking into more production work - where I should be!

Hope to see most of you soon & at a show too!

Ciao for now,
TT
Posted by Tina Tassels at 10:00 PM No comments: