I am SO excited to be working for a brand and physical store in New York that caters to a size range of XXSmall up to 4X!!

After the first phone call my co-worker received asking "Are you only going to carry size 0s like every other store in NY?" we started to get people popping their heads in the door with the same question. The sheer sense of relief that comes over their face after I tell them our range is unforgettable. One woman, visiting from the UK, was so grateful "to find beautiful styles in my size" she could barely say the words. The experience has been giving me goosebumps!

I mentioned it in my last post, that I actually asked my interviewer "I know Bettie Page makes plus sizes, but will we be carrying it in store?" I too was not only relieved, but proud even to be able to represent a shop that is so lacking in NYC.  I'm also getting smaller sized girls (just as self-conscious as us chubby ones wouldn't ya know!) saying "but I don't have any curves for these." I have been assuring my clients:

**If you have curves the pieces will show them off, if you don't have curves, the dresses will create them!!**

I've really been enjoying work. Sorry for this delayed post. I had a shitty bought of PMS and was SO tired every time I sat in front of the computer this week. Now that I'm not pregnant (read: I'm boatin down red river) I actually have my normal energy back! I am starting to feel much more settled at this job than I had in an entire year and a half at Sephora. I loved my coworkers and doing makeup, but that isn't where I wanted to be. I felt anxious a lot of the time being on the hunt for work. I definitely derailed from the performing track and I'm getting myself back on it! I am fiending for it!

I'm also in need for the touch and smell of a man. How's that for a closer?
Thanks for stopping by, have a great weekend!


PS: Haven't been on stage in awhile, but I'll be stripping for Sandy victims - come check out this awesome benefit: HurriDAMES! I can't wait <3
Posted by Tina Tassels at 11:17 AM 1 comment:

Gots me a new Jobby Job

HOORAY! If you follow me on Facebook, Twitter, and even Instagram (@TinaTassels) you'd know by now that I got a new gig with one of the cutest pinup brands on the market BETTIE PAGE CLOTHING!!!

My manager is amazing. Her and I are very much alike. She hit the nail on the head and I freaked out with one of my Tina style YEAH!s and was offered the job on the spot. She said something along the lines of "it's hard to find someone with a bubbly personality that is still business minded." Some of you are probably saying "not really," but in the business world it really is. I feel like I have struggled with this my entire life. That being outgoing & funny also seems to give way to a less responsible, passive mentality and therefore in no way have any sense of business. I like to think I defy the stereotype and live through it...werk!

Leaving Sephora is bittersweet. I will miss the people I work with more than anything else there. The company is too big for my taste. Working for the man wasn't my slice of pie, so I'm looking forward to a smaller team & company. I feel confident I might be able to soar with BPC - LOL insert inspirational card job here.

Last week I skipped out on you guys to spend some time in NJ. I got a new license & spent some QT with my crazy bro. We had a great sushi lunch and ended up doing some shopping then grabbed a couple of drinks. Good bonding sess. I also got my hurr did and tried something new: blonde with pink highlights. While I do like the look, I'm missing my pink head like crazy! I think I'll leave it like this for now and the next round will be full head again.

I have to give a quick shout out to my friend Rebekah - you guys know her as Bex. She finally got to share some good news with you all (I already knew mwahah) that she will be hosting a new show on Veria Living...I searched her name for you so you can see what she's done so far! HOW FREAKIN COOL! I know good peeps! <3

Thursday is Thanksgiving, yum! I will be home Wednesday night to have drinks and endure hellos from people that didn't talk to me years ago. I don't mind, I liked everyone, I just find it interesting. People are fascinating, aren't they?

I'm gonna end on that note :)  I have a show coming up - I'm calling it "Strippin for Sandy" but it's really: HurriDAMES. I don't think it'll be a new piece but we'll see!! Excited to get back on stage and for a great cause! Hope to see you in the audience!

TT
Posted by Tina Tassels at 10:16 AM No comments:

The Places You Will Go

From the second we all hugged and said hello, we felt guilty for the fact that we were leaving NYC in such a time. My road trip friends and I were all fortunate in the wake of the storm and had barely lost a volt of electricity. We came to a mutual decision that we were not doing anything wrong, that life must go on, and that we had planned this over a month ago...so on our adventure to the Berkshires we went.  Our destination being to visit our girl friend who had left NYC a year ago to better care for her mom. Read her sweet blog here: Little Tobin & Daughter.

I for one was excited to A) get some fresh air outside of the city. I've been feeling stressed lately for so many reasons, B) actually go on a trip with friends outside of NY and not just to NJ (no offense you guys!), and C) venture to a city/village (ha!) I had never even heard of before meeting my friend4 years ago. The drive was breathtaking: mountains, lakes, colorful trees (with whatever leaves had survived Hurricane Sandy's wind), winding roads, no traffic, barely any cars on the road, sunshine.

During our 3hr+ trip we had all caught up. We knew there were some plans for the weekend starting with our friend's gallery showing. That night in Pittsfield was the Artswalk. This happens every first Friday of the month where galleries open their doors and people spend the evening walking the town and checking out the exhibits and chatting with the artists (and the occasional junkie just looking for a bite to eat).  We had a blast roaming the streets, talking to locals who were so kind and inviting to us stick-out-like-soar-thumbs visitors.  That night my fellow traveler VD (hush your jokes! hahah I'm laughing now too!) shared with me her interested in water colors and how she might take a class. Well inspired she was when we walked into a water color gallery. She declared "That's it! I'm doing it." 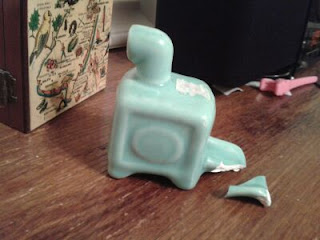 During our walk we also stumbled into Wild Sage thrift shop. IT WAS AMAZING!! I could have spent hours and many dollars in there if we weren't in a rush to get back for a tap dancing showcase. I did manage to grab a new addition to my single cigarette ashtray collection, check it out!  I bought it as a single piece and now it's in 2. *sad face* My roommate accidentally knocked it over and it cracked. These are hard to find and it was the first time I had ever seen one in person. There's only one listed on ebay and it looks like someone made it yesterday. *Grabs crazy glue*

So back to that tap dancing. The showcase turned into a mini class!! It was the first time I had actually been taught some sort of step. The teacher brought a suitcase full of shoes so we all stood in a circle and got to tap a bit together. Well hello again inspiration because I think it's time I finally signed up for the tap class I've wanted for over a year now!!

The next day we headed to Mass MoCA. I hadn't been to a museum in forever so it was refreshing and much needed! The bonus? Bank of America card holders were FREE! (Thanks for that universe, you got my financial back!) There was a huge wing closed off because they were building a phoenix exhibit. Phoenix like the mythical bird, not the city. Well 3rd times a charm right? Our other fellow traveler SDR has been constructing the idea of a phoenix tattoo but still wasn't sure. He'd be going to Italy in a few weeks and was planning to visit his artist while back home. I'll admit, this didn't seal the deal for him, but it was actually when during our last meal in Massachusetts an elderly woman walked in and had a huge embroidered one on the back of her coat. So misplaced and so perfect. He's now ready.

I'm not ready to be back in NYC yet though. Being away was really great. I don't wanna talk much about the hurricane aftermath because it's devastating. I'll be getting some things together to donate. If you can, please look up the nearest center, drop off some supplies or warm clothing. Anything will help!  If you've lost it all, the only way left to go is up...keep the faith <3

As of now I don't have any shows scheduled. It's definitely a bummer, but I've really been focusing on my finances and getting a job that I both love & pays the bills better.  It is no easy feat right now. I have a couple new acts though I've been focusing on minimally. I hope to get more settled in the coming season and hopefully get some projects going! I have an interview on Tuesday with Bettie Page Clothing. They're opening a store in New York City and I am hoping to join the team. I don't always like sharing what I'm interviewing for, but it doesn't matter. I'd tell you next week anyway :) Wish me luck!